As a result, people are often surprised that I like to stop and look at motorcycles, and that I declare my love for my car on practically a daily basis. “How can you love cars when you hate driving?” The answer is simple. If I have to drive, if I absolutely HAVE to be on the road, then I need to do everything I can to alleviate the pain and improve the experience. Thus, I drive a super cute sportscar with Hello Kitty seat covers.

And for our California-Nevada-Arizona road trip I wanted a monster truck.

But everyone laughed at me. Including the travel agent. It turns out that not only did no one else want a monster truck (especially the people who were going to drive, which is NOT ME because I can barely manage driving at home on the correct side of the road, let alone here on the wrong side) – but the car hire place didn’t even have a monster truck to lend us.

So we ended up with this instead: 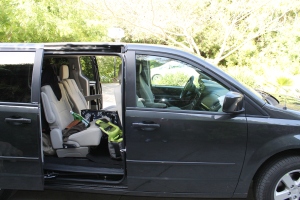 Even the car hire guy was surprised we didn't want something more exciting than this minivan. I tried to say we did, but no one ever listens to me. Apparently it's because I'm "very small"

A Dodge Caravan. It’s a big seven-seater, family friendly, gas guzzling minivan. Actually it isn’t a gas guzzler, I only said that for the alliteration. It’s really economical. Which is yet another way of saying that it’s boring.

But – there’s a bright side! We have a GPS, and Alicea discovered that we had several options for an avatar (is it called an avatar for a car?) on the GPS screen so just for me, she made it look like we have a monster truck:

So big it doesn’t even fit on the road!

So now I can happily sit right up the back of the car (because I’m an Aussie, and we all just naturally gravitate to the back of the bus) and ignore the fact that it’s a van in favour of the more exciting belief that it’s actually a super awesome monster truck that could mow down everything in its path. Which is lucky because according to the pictures on GPS land, our monster truck is bigger than some of the towns we passed today.

Other stuff I wrote in the past

All my favourite topics